I recently was talking with Smooth about humility and I got to thinking. You see, recently, there was some crazy political stuff within the SBC (Southern Baptist Convention). Now, you might read this and think “Isn’t that all the SBC does, period?” And you have a point. But this particular thing was as great interest to me personally. See, recently at Southeastern (one of the six SBC seminaries), we had Mark Driscoll of Mars Hill Church in Seattle speak in chapel and at our 20/20 Conference. Less than a week later, Baptist Press (another SBC entity) wrote a harsh and unbalanced article on Driscoll. The guys at Baptist21 have a great critique of it.

But that’s not what I’m blogging about. Regarding all this, I read this article by a former prof at Southeastern is was amazing. Dr. Alvin Reid (whom everybody calls Doc) wrote that he has a problem, and I’m going to repost all of it here. Enjoy.

I Have a Problem

I have a problem with Martin Luther. Oh yes, I know he started the Reformation and we owe him much. Yes, he gave us great hymns, Sola Scriptura, and other important contributions. But he did not come far enough theologically for my tastes. And he liked beer too much.

I have a problem with John Wesley. Sure, he led a great awakening and helped to spare England from much the French experienced in the French Revolution. He led a missional movement that resulted in thousands and thousands of new believers and churches. But he quite frankly was a terrible example as a husband.

I have a problem with George Whitefield. Whitefield, that young, bold evangelist who came to the American colonies seven times during the Great Awakening, preaching to multiple thousands while only in his twenties, did much good for the gospel. He even started an orphanage in the colony of Georgia which is still in existence today. But he also had slaves at that orphanage. Though he treated them well and preached Christ to them, I have a real problem with that.

I have a problem with Jonathan Edwards. Sure, he helped lead a Great Awakening. Pretty impressive. He wrote some of the greatest writings on revival in history. He was a pastor, leader, missionary, and thinker. But he is just a little too Reformed for my tastes in his treatise Freedom of the Will.

I have a problem with W.A. Criswell. The famous pastor of First Baptist Church, Dallas, did so much good for the gospel and the SBC during his time. Criswell was more innovative than many know in evangelism, and had a constant burden to see people saved. He played a vital role in the conservative resurgence. But Criswell allowed his numbers to be inflated, particularly in church membership, which has not been a good precedent.

I have a problem with Mark Driscoll. Driscoll, the pastor of Mars Hill Church in Seattle and recent speaker on our campus, has seen possibly more hardcore unchurched young adults come to Christ in the last decade than any church in the US. He has led a church planting movement as well. But sometimes his language is a little edgy for my tastes, and I interpret the Bible differently than does he on the place of alcohol.

Finally, I have a problem with my convention. I am a Southern Baptist. I have blogged before on why I am a Southern Baptist. But I have a problem with my convention, when we seem more intent on witch hunts than on contextualizing the gospel in our time, when we love to pick at each other’s differences than unite for the sake of the gospel, when we are more concerned about our total receipts than we are the lostness of our nation, when we continually confuse personal preferences with unchanging truth, and when we castigate younger men who love Jesus and His truth for simply doing what we taught them to do: study and honor the Word (when they come to different conclusions than some of us on secondary issues, they scratch their heads at the response they get). I was a supporter of the conservative resurgence before it was cool. But the resurgence I supported did not include a Pharisaical legalism that expects conformity in nonessentials. I supported a resurgence to stand on the inerrancy and sufficiency of Scripture, one that now has led me and many others to see the need for a Great Commission Resurgence to be built on the foundation laid by the conservative resurgence. I am tired of talking good younger men off the ledge from leaving the SBC.

So, I have a problem. I have many heroes. I did not name them all. But none of them are perfect. None of them are Jesus. I can live with that. I can honor people who may be more Landmark on the one hand or Reformed on the other than I am. I can learn from and respect people who love the Word and the Gospel yet who may do things a bit differently from me.

I wonder if I am the only one…. 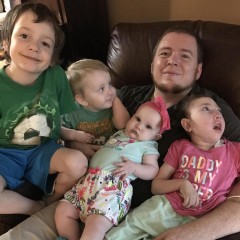